The thirty days between the middle of June and the middle of July in 1914 was very active in the Dysart area. The citizens were busy promoting their upcoming Fourth of July celebration and first ever Chautauqua both of which were held the first week of July. The The Great Booster Parade to promote themselves in the area was a success and a wonderful July 4, 1914 celebration  was nearly perfect except for the tragic death of Earl Emery. Join me today as we find out what else happened that mid-summer in 1914.

On Friday June 19, thirty year old local businessman, George P. Hix drove over to Traer, a town nine miles to the west to visit a friend. He arrived back in town about 12:30 in the morning. Although he had a successful career as an implement dealer, the young bachelor still lived with his parents George and Lena and saw no reason to head home. While driving by the electric light plant he noticed his friend, T.E. Sackett was working late so he stopped for a visit. He decided to drive a block over to the train depot where he knew his cousin, Nate Burhenn, was waiting to leave on the train. Ray Rhyner, another friend, was working at the depot that night where he was both a depot assistant and telegraph operator. Both men were musicians and so they took some time to play the mandolin and guitar while waiting for the train to come in and Ray's anticipated release from his work duties. Sackett may have heard the music so he  walked over, inviting the men to come back to the power plant after the train left where he would join them on the violin. Their jam session lasted about an hour an a half. At about 4 a.m. both Sackett and Rhyner expressed their fatigue and thought it time to head home but George was restless and not ready for bed so he suggested they take his car and go for a cruise. Those of us who grew up in small towns remember doing the same.

At about 5 a.m the men found themselves out by the Catholic Church and turned south onto what is now Highway 21. At that time it was a dirt road lined with a grove of trees. The newspaper suggested they were headed for a "southern loop" which had "good roads" (unsure if they meant road or the oval race track that was located south of town). Traveling at about 25-30 miles per hour they had gone about a half a mile when for reasons that were never made clear, George lost control of the car and it rolled over. At that time, car rollovers were quite common. The roads were rough and the cars traveled about on skinny tires which provided little stability. Newspaper articles from then almost always refer to it as "turning turtle". All three men were ejected from the car and after it had made a full rotation, Sackett was under the car; Rhyner and George Hix had been thrown away from the vehicle. Ray was able to help Sackett get out from under the car and both men then went to check on George who by their description was "standing erect on his knees facing the west but unconscious". The men tried to help him to stand but he soon collapsed. One or both of the "boys" as they were referred to in the newspapers articles ran to find a telephone and summoned Dr. Redmond who arrived within ten minutes. They transported George to Redmond's office where he died from a skull fracture, never regaining consciousness. 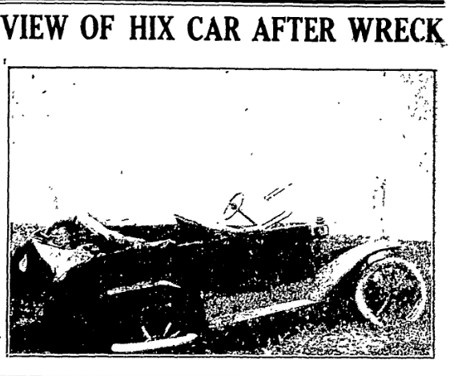 George's body was moved to the undertaker's at about 7 a.m. where it was held until an coroner's inquest could convene at 4 p.m. Sackett and Rhyner both testified that George appeared to have control of the car and they had no idea why the accident had occurred. John Lindeman, Ervin Krebs and Ross Taylor served as jurors and after listening to the testimony of the two witnesses determined that "George Hix met his death in an automobile accident the cause of which was unknown to the jury." George's body was released to his family and moved to their home where it remained from Saturday night until Monday afternoon. At 1:30 p.m. a prayer was offered at the home and the family followed George's body to the Evangelical Peace Church (now the Dysart Historical Center) of which the Hix's were founding members. George's service was offered in both German and English by Rev. Hild of the Peace Church and Rev. Lorenz from the German Evangelical Church. It was one of the largest funerals held in that church up until that time. The Dysart Reporter stated "Special music was rendered by a number of Dysart's best singers. The floral decorations were beautiful and beyond description."

By way of eulogy, the paper reported, "George was one of the biggest hearted fellows we ever knew. His circle of friendship was unbounded. In business matters he was the kind of an honest square fellow that one likes to deal with. In social activities he strived to be the best. He was a member of the Helping Hand Sunday School at the Evangelical church and was quite regular in attendance. He was always pleasant to meet, always having a smile and probably some witticism for an answer. We cannot recall more pleasant evenings than those spent at the Hix home with George and several other friends passing jokes and enjoying music. He will long be remembered by all his acquaintances and relatives." George was survived by his parents: George and Lena and his sisters Mary, Nettie, Louise, Amanda and Katie. It appears that Mr. Sackett and Mr. Rhyner were both temporary residents of the town of Dysart. Not much could be found on them past 1914.

Driving around with friends is likely a familiar theme for many of us who grew up in small towns such as these. Long after all the businesses were closed and not wanting to go home we would often drive around town. Sometimes, you might congregated uptown or some other parking lot to sit on hoods or tailgates with others unwilling to go home. You and your friends might stop in the park which was suppo0se to be closed or drive out to the cemetery and try to scare each other to death. Thankfully for most of us these are sweet and happy memories. 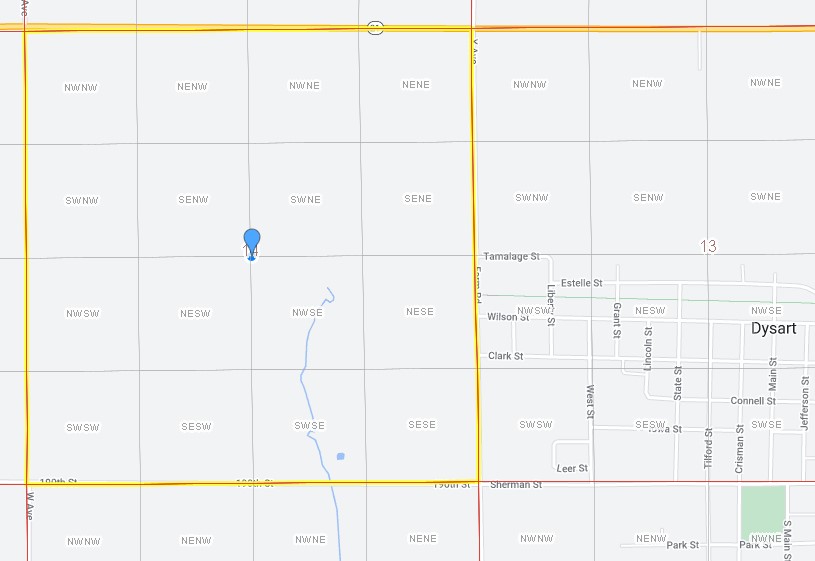 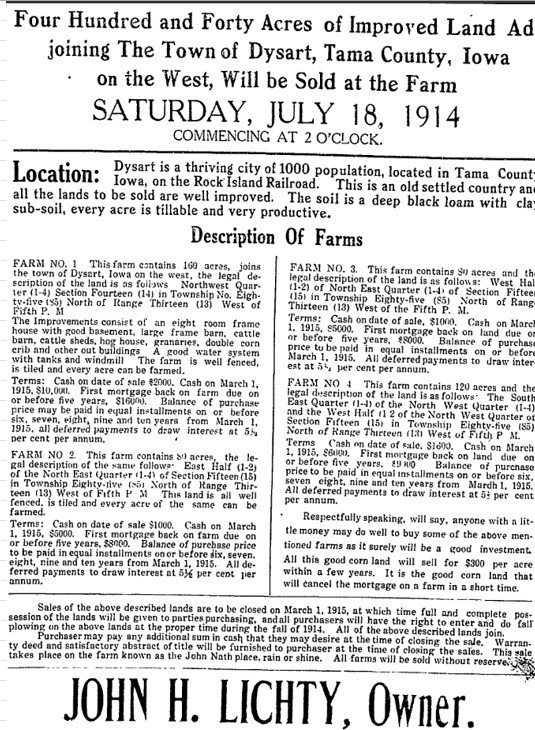 The Krambeck Farm was sold by auction on June 20th. This was an eighty acres farm located adjacent to the town of Dysart. It fetched the highest price ever offered for Tama County farm land up  until that time at $277.50 per acre. The winning bidder was Ed. Thomas of Geneseo. Other bidders included: Theo. Matthisen, George Kersten, L.C. Knupp and Chris Nelson. Bidding started at $250 per acre. Mr. Krambeck had purchased the land six years before at a price of $100 per acre. The local paper in describing the land stated; "The price is the highest ever paid for Tama County land, yet the eighty has a ditch through it, has considerable low land and although well improved has a house thirty years old. But it is a delightful home, adjoining the incorporation of Dysart, and a very tempting place." Shortly thereafter, John H. Lichty, offered property which adjoined Mr. Krambeck's for auction. This land was sold in four different auctions totaling 440 acres within the yellow area in the photo. This land sold for between $200.75 to $222.50 per acre and was purchased by Theodore Heckt, Peter Wieben, Joe Thierer and Emil Benesh of Cedar Rapids. 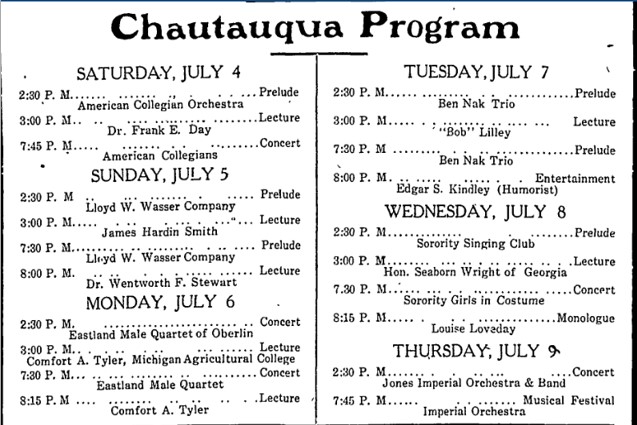 Dysart's first Chautauqua which ran from Saturday, July, 4, until Thursday, July 9, was both an entertainment and financial success. Approximately $900 worth of season tickets were sold and after all expenses were paid the Commercial Club netted $300.00. Several interesting lectures and musical performances were enjoyed throughout the week.

After two years of publishing the Dysart Reporter, R.E. Lee Aldrich, sold the paper to E. E. Roland who came to Dysart from Ocheyedan, Iowa. The following week, Mr. Aldrich, received a serious electric shock and survived. Mr. Aldrich, his brother and the new owner of the paper were on their way to the office. The main street had been roped off to protect the surface which had just been oiled. Aldrich grabbed a rope in an attempt to allow a car to pass under it. This caused the rope to come loose from the light pole so he reached around the post to retie the rope. Unfortunately, due to some faulty wiring the pole had become charged and Aldrich was shocked. He fell to the ground unconscious but regained consciousness quickly and fully recovered. 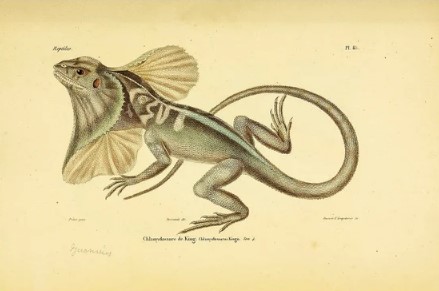 D.E. Cone created some extra excitement during Fourth of July celebration when he sent away for a "Chinese Dragon" to be displayed. He stated before the event that "people who have read about dragons in myths and legends will be greatly surprised..." This was later described as a five foot creature and was likely an iguana or other lizard but was something new and unseen to the people at the celebration.

According to the local papers a Traer bootlegger brought bottles of alcohol into Dysart in a suitcase or valise on the 4th for the purpose of selling them. The papers describe Dysart as a more "temperate sister city" than neighboring Traer. One of the bootlegger's fellow Traerites saw him and reported him to a Dysart police officer who was not fond of the alcohol trade. The citizen and officer searched for the bootlegger without success. A second police officer, more sympathetic to the drink, did find the the bootlegger and warned him that leaving town would be in his best interest. He escaped without charg 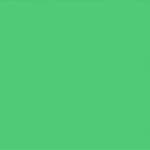 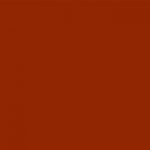 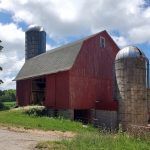 Two paint colors regularly advertised as available during 1914 were Paris Green and Venetian Red Ground, both very familiar colors. Venetian red was a popular choice for barns and farm buildings. The paint got it's name because historically this pigment was produced from natural clays found near Venice, Italy. The clays contained an iron oxide compound that produced this red color. By the 1920s, these clays were being mined  throughout the US including in Iowa making the paint readily available and affordable. . The paint was non-toxic.

Paris Green as a color was used on everything from cabinet doors and shelving to furniture and was incorporate into much of the glass and ceramics of the time. Developed by two chemists in 1814, the compound 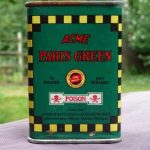 was used as both an insecticide and paint pigment. Because of it's make-up the substance was highly toxic and required care in handling. That summer in Iowa, a farm wife living northeast of Clutier was found dead in her home. Her death was ruled a suicide as the result of taking a dose of Paris green. She was not alone. Over the  counter poisons were often the chosen method of suicide in the early 1900s. 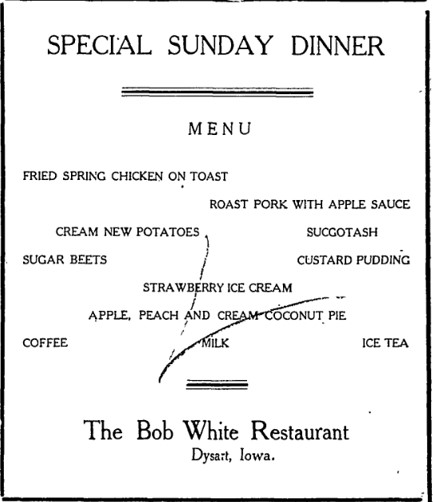