Wars and Rumors of War

After the people of Dysart hosted their Fourth of July Celebration and first ever Chautauqua which brought thousands of locals and visitors to town, life should have settled back into a more normal pace for her residents and area farmers. Summer is a short-term affair in the Midwest and Iowans like to make the most of the weather. There was farming, gardening, commerce, and recreation to be pursued. Soon, though, the outside world began to infiltrate their lives with news of the spreading war in Europe.  War which was happening in the very lands many of these people had immigrated from. Places where many of them still had parents, siblings, and extended family as well as financial interests. 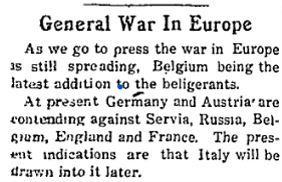 Across the nation, Americans tried to understand the situation. A headline in the Reporter read, “Explanation of European Crisis is Hard to Find – Diplomats and Observers Unable to Understand the Attitude of Austria”. Soon, the war started to impact the daily lives of Tama County residents. The week after this was posted in the paper, a man named Fred Baur informed the Dysart Reporter that he had “army fever” and would be leaving for Germany within a few weeks to join his countrymen in battle. News began arriving of Americans stranded in Europe. Three Tama County residents found themselves in this circumstance. Herman Boettcher of Traer and his daughter, Marie, where stranded in Germany where they had gone to visit family. H.J. Stiger of Toledo was similarly stranded in London. In response, the United States sent the warship Tennessee and a cruiser, the North Carolina, loaded with gold to Europe to help these citizens return to the states. E.J. Stayskal of Carroll township made an unsuccessful attempt to return to his native Bohemia on a steamer, but the ship was turned back and narrowly escaped being captured.

At the Brick and Tile Yard in Dysart, city marshal, George Geyer, was summoned to break up a fight which erupted between foreign workers with differing nationalist views on the situation in Europe. This, of course, was only the beginning of a war that would take it’s toll on the citizens in very personal ways in the years to come. At the time, though, they had no idea what was coming.

The Death of George Wood

In 1914, the town of Dysart was in its forties and her founding citizens were beginning to pass away. One such pioneer was George Wood. Born in 1834 in Pennsylvania, George’s family had followed a common path of westward expansion having moved from Pennsylvania to Ohio and then on to Illinois. He was a veteran of the Civil War who initially moved to Benton County. By 1873, George was farming in Benton County and had opened a cobbler’s shop in Dysart which quickly expanded into the retail shoe business. His biography in the “History of Tama County” portrays his shop as a place where men gathered to discuss politics, news, religion, and mythology as well as play chess. He remained in business until 1911 when he moved to Albert Lee, Minnesota, to be near his sisters. After his death in July, his body was transported back to Dysart by train and he is interred at the cemetery there. From all accounts he was a strong leader for his community and a well-loved member of the town he helped found. Below is an excerpt from his obituary in the Reporter. 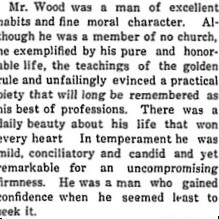 On a Thursday night, Ed Christian and John Pippert were riding in a buggy headed for town. Two and a half miles northwest of town they were struck by an automobile driven by Rowan Dysart. The car hit the rear end of the buggy which sent Christian and Pippert to the ground. Both men were badly bruised and unable to work for several days but not seriously injured. Mr. Dysart and his passenger, Kenneth von Lackum, stated that the dust and fog were so thick that they did not see the buggy until they bumped into it. The car sustained minor damage; the buggy was a total wreck. These types of car versus horse incidents were fairly common in the early days of automobiles. 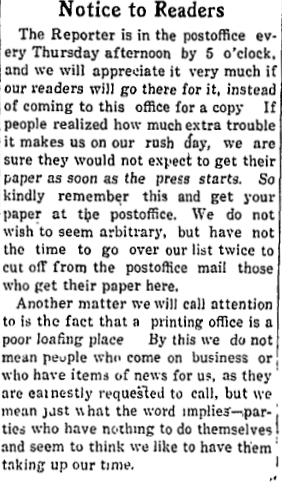 The “Back Road” To Cedar Rapids

The Lincoln Highway was proposed in 1912 and construction on the new transcontinental road began in 1913. Now known as Highway 30 in Iowa, this route eventually traversed the nation from New York to California. Realizing that the road was going to bypass their towns, the commercial interests north of the road banded together to create a new auto route between Cedar Rapids and Marshalltown which ran through their respective communities. Many people who live in the area would now consider this the “back way” or detour route to get from southern Tama County to Cedar Rapids. 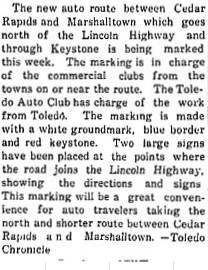 Meanwhile, construction of the Lincoln Highway continued. Two couples from Traer, Burt Aldrich and his mother along with Ira Beecher and his wife made a trip to Dewitt, Iowa which was chronicled in the paper. They reported that they made the drive on the Lincoln Highway after leaving Cedar Rapids and the road was in bad shape with a maximum speed of fifteen to twenty miles per hour. 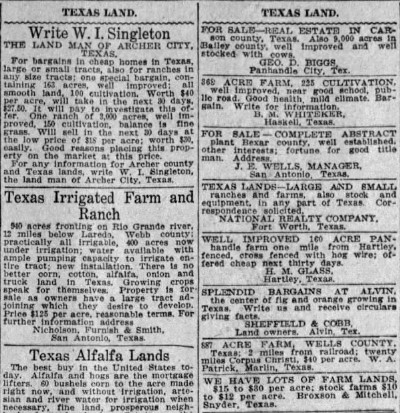 The newspapers of the day had several ads offering cheap farmable lands in other states. Many of the farmers in the Dysart area owned farms in Minnesota, Wisconsin, and the Dakotas. Others moved to these new lands. The exodus from Iowa was real. In the previous five-year period, Iowa had lost about 22,000 adult male citizens, a large portion of their working force. In response, in early 1914, Iowa businessmen created the Greater Iowa Association to promote the state. In the fall of 1914, the Reporter told cautionary tales of land deal scams throughout the country. The first scam was being run out of Chicago and was aimed at pastors in the Midwest. The perpetrators claimed to have 75,000 acres of land available in Missouri. For just $15 a pastor could enter the lottery and possibly be allotted a farm or a share in a yet to be planted orchard.  The second story was published by the newly formed Greater Iowa Association ran in papers throughout the state. In a heavily redacted letter from an alleged Iowan in Texas they told the story of 600 families stranded there without money or food after buying worthless land which they purchased sight unseen. The Association threated legal action against the land company and filed a suit with the US Postal service for mail fraud. The real estate board of Texas responded quickly in defense of their state and the whole matter seems to have disappeared from the papers by early in 1915 when their attention was focused on the Panama Exhibit. 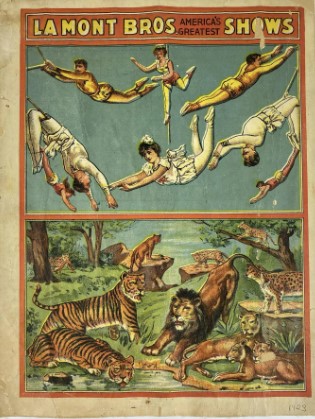 Baseball and The Circus – Labor Day 1914 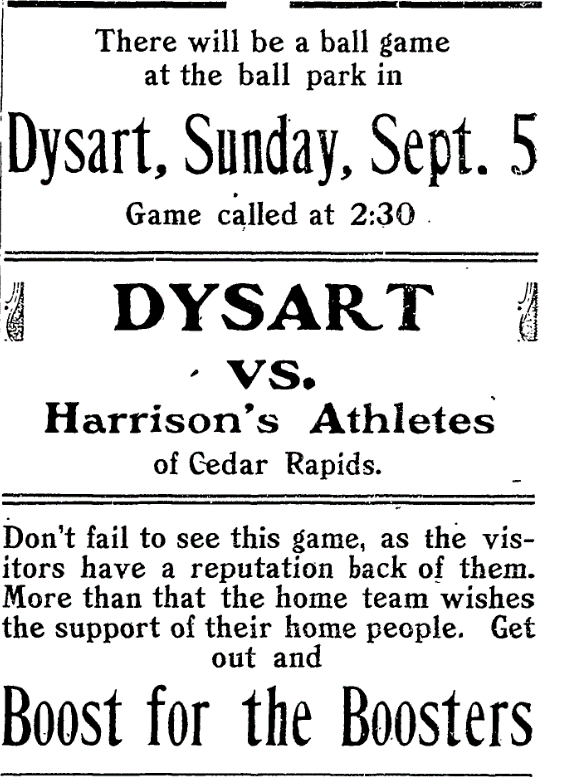 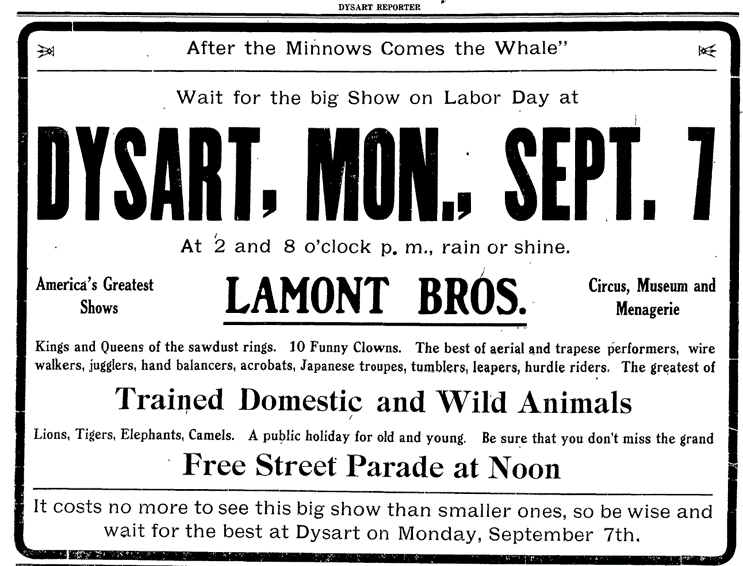 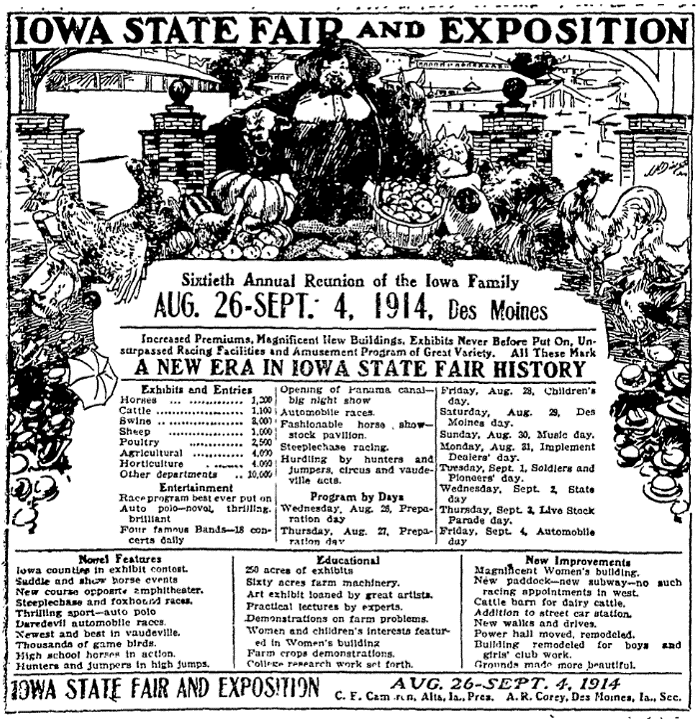 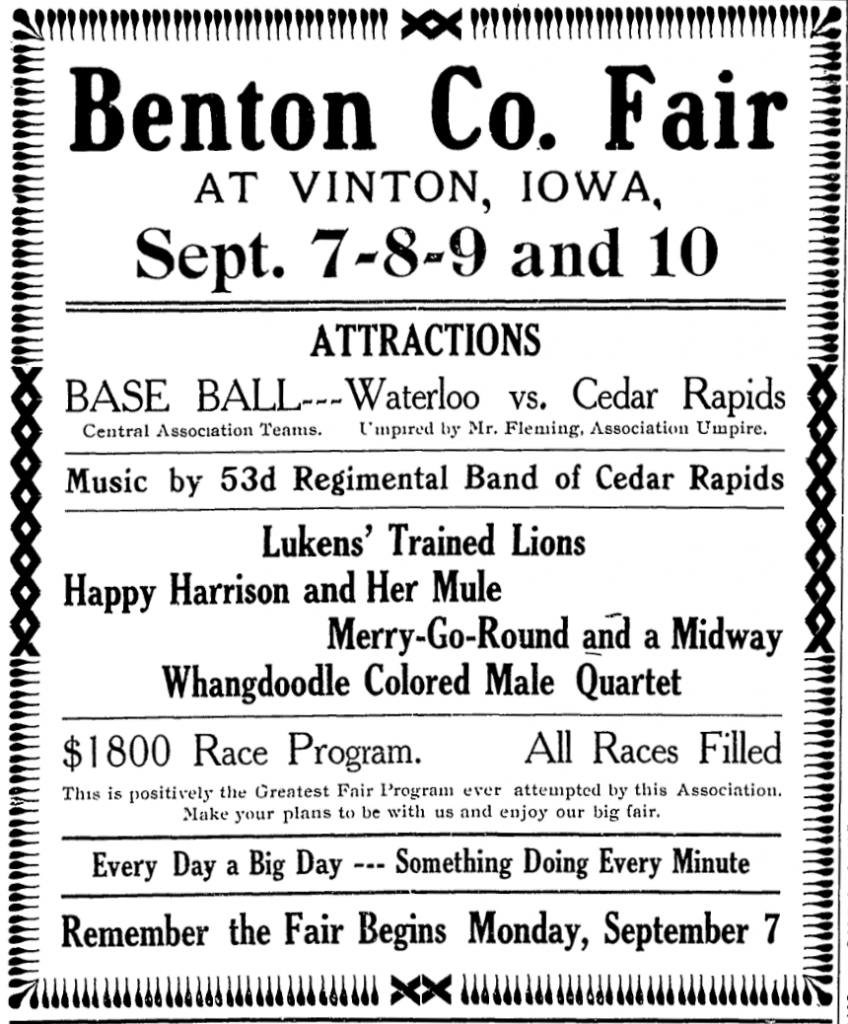 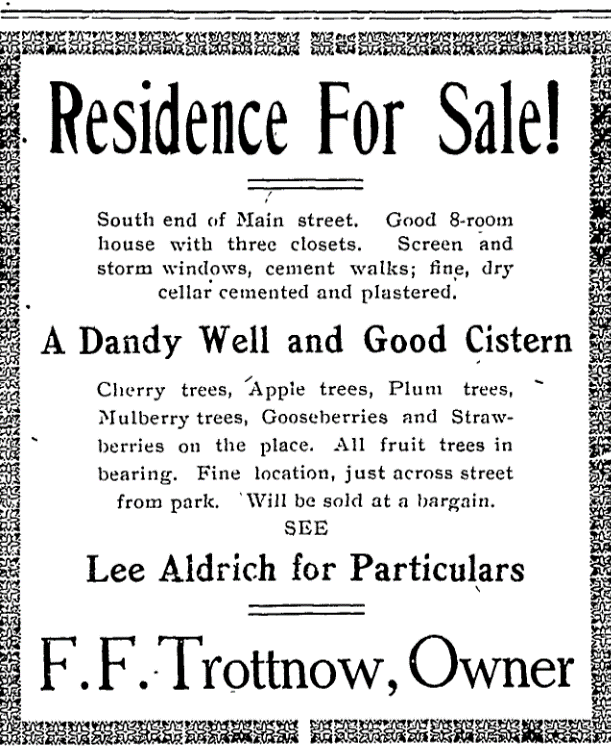 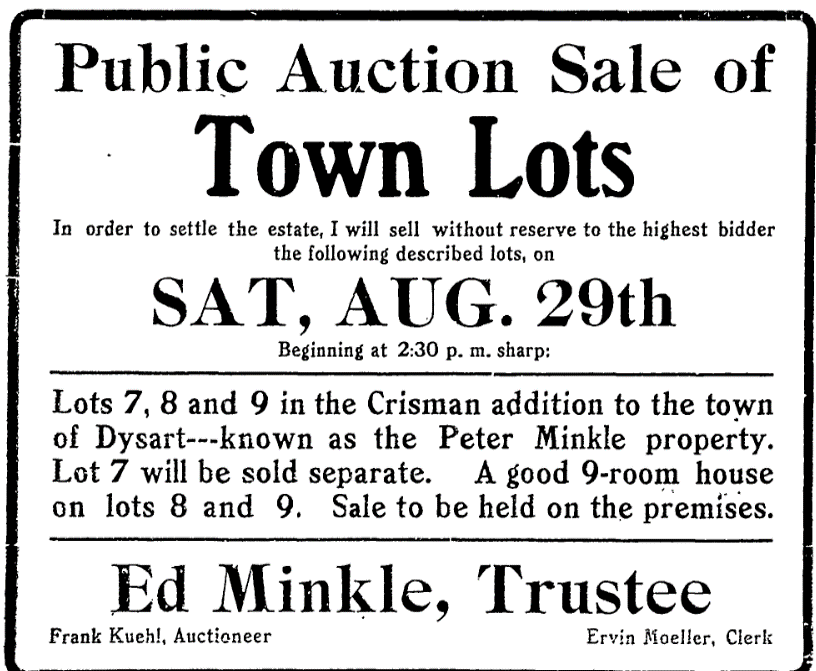 According to the Dysart Reporter, the residence was sold to George Schreiber for $950 who then sold it to H.W. Beilke for $1,000. John Klar purchased the vacant lot for $400 who then sold the lot of Mr. Beilke at a profit of $50. Mr. Beilke planned to have the property improved and move his family there the following March. 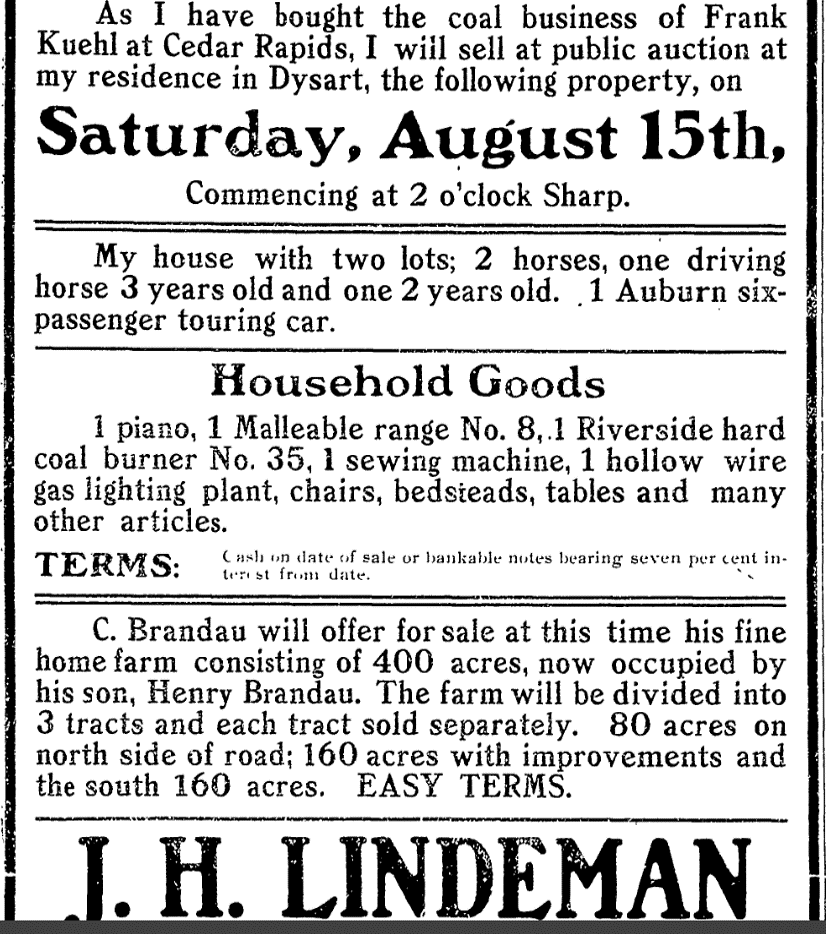 According to the Reporter, a good crowd was present for this auction. “The household goods sold readily at fair prices. The horses did not bring what they should, a three-year-old horse going for $110 and a dandy two-year-old colt for $77.50.” The car was sold to George Kersten for $980. The house and lots were sold to C. Brandau for $2975 who then sold the place to Will Kline for $3000.

If you have enjoyed this post, please consider signing up for notices of upcoming articles!